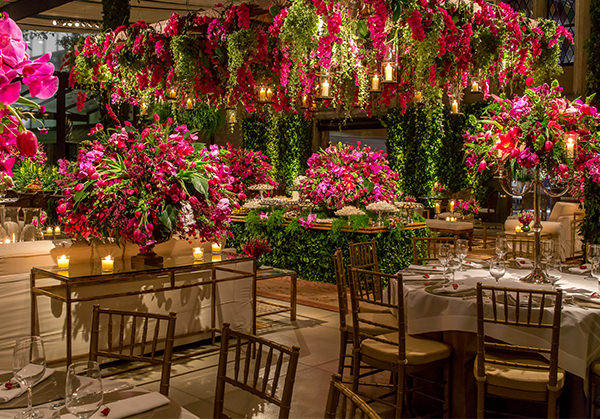 Noble buffet, quality champagne and lots of flowers help to make up the budget. (Photo: Publicity)

Luxury wedding is an expensive business. But it was much more after the pandemic. The price of the basic package for a wedding with all the best and the best went from R$1,500 per guest to at least R$3,500.

The estimate is from luxury wedding planner Ana Julia Figueiredo, who has been in the business for 16 years. These values ​​do not include personal expenses, such as the bride’s dress, hairdresser and wedding night.

“I say: you can have a cool party with R$ 4 thousand per guest. In a first interview with the bride and groom, I am already amazed”, she jokes. But the increase has an explanation.

First, everything stopped. Then everything went up. Now, everything has opened and continues to rise. This combination of strong demand (many people wanting to get married and have a party) with high prices made the values ​​of services and products in the party sector explode, he says.

Influencer Juliana Motta is engaged and was taken by surprise by the new prices. Proposed in 2019, she had her planning interrupted in 2020. From then on, to do the same wedding she had planned, around R$ 60 thousand, she will need to pay 4 times more than scheduled. And that’s because the spreadsheet hasn’t even closed yet.

Buffet prices have increased by 50%. If before it was possible to serve a good and basic menu from R$ 280 per person, now it is necessary to pay at least R$ 420. The basics have a white meat, a red meat, a pasta, a side dish (risotto or vegetables), salad, antipasti island, desserts and non-alcoholic cocktails. In the most elaborate, you can have foie gras, octopus and truffles.

Alcoholic beverages also play a part in raising the bill. “Today we pay for champagne from R$400. Before, we could get it for R$300. And it goes a long way, an average consumption of a bottle for every two guests. And at the same time you have to have a caipirinha bar, with lots of drinks, which costs another R$100 or R$120 per guest”, he says. And there’s still wine and whiskey.

In addition, there are the details: invitation, calligrapher, sandals for the guests to dance at the party, souvenirs, tableware and table decorations and valet parking for the cars greatly increase the costs.

When you put all the cats in a spreadsheet, luxury weddings can exceed the value of R$ 1 million. “I speak with embarrassment, because it’s a lot of money. But expensive is relative. We have to be careful when talking to someone not to sound snobbish”, worries Ana Julia.

Can you get married without flowers?

Well, yes, but they are the charm of the event’s decoration. When it comes to the luxury market, “the sky is the limit for decoration and flower”, says Ana Julia.

Juliana is one of those brides who is in the clouds when it comes to decoration. After struggling to find a place by the sea that would accommodate her guests, she had another scare.

“Without a doubt, what rose the most was the decoration. It was going to cost around R$ 30,000, which is already a lot. But everything went up, everyone is getting married in 2022 and 2023. And everyone wants to decorate with flowers. So it really tripled in value. My ceremonial is tired of saying that I want a wedding full of flowers, that’s why it’s expensive,” she says.

The expressive increase of this market weighed on the budget of the parties. Before the pandemic, the planner says that to organize a wedding for 400 people, she spent, on average, R$ 200 thousand on flowers and decoration. Today, the value reaches R$ 380 thousand.

“But can’t you find it cheaper?” Here’s the thing: these are the market prices, not a specific supplier, guarantees Ana Julia.

Roses are the flowers used in greater volume at parties. Her button went from R$0.30 to R$3. Tulips also help to add volume. And a pack went from R$22 to R$35. Orchids are the darlings. Her branch increased from R$12 to R$30. And peonies are the most sought after, because they give little and are charming. And more expensive: a button costs from R$25 to R$30.

Even those who have a lot of money to pay for a party also cry for discounts and feel the impact of increases, or because they compare budget with previous parties or those of friends.

But even with the high prices, Ana Julia says she never had as much party as she does now. “We still have clients from 2020 and 2021 weddings. And the eagerness of new clients wanting to celebrate at all costs. People got married again on Fridays, they started getting married on Sundays, it stopped being only on Saturdays. I have a wedding next Thursday.”

Bad for some, good for others. She says that a wedding for 400 guests generates 200 jobs, between production, assembly and the party itself.