From this Monday, 22, premiere Sertão Sea, a new plot from 6 on Globo, where the public will follow the beautiful love story of Candoca (Isadora Cruz) and Zé Paulino (Sérgio Guizé). A love that is put to the test by the circumstances of life. The womanizer Tertulinho (Renato Góes), son of Colonel Tertúlio (José de Abreu) ​​and Deodora (Débora Bloch), will do anything to win the girl’s heart.

Written by Mario Teixeirawith direction of Allan Fiterman, the plot takes place in the Brazilian northeast. The cast has great names in Brazilian dramaturgy and also talents of the new generation. And the coolest thing is that it brings many actors in the northeast.

Candoca (Isadora Cruz) – Strong as her mother, Dodôca (Cyria Coentro), the young woman fights for what she believes in. She is a teacher in Canta Pedra and dreams of becoming a doctor. At the beginning of the plot, she is engaged to Zé Paulino (Sérgio Guizé), her great love. When the boy is presumed dead, she approaches Tertulinho (Renato Góes) – after an enormous effort from the boy. Owner of her own destiny, Candoca faces the difficulties that life imposes on her with maturity, but without ever losing her grace and good humor. She is great friends with Lorena (Mariana Sena) and Labibe (Theresa Fonseca).

Dodôca (Cyria Coentro) – A widow, the seamstress created Candoca (Isadora Cruz) by herself. She has the beauty of her daughter, but she is a suffering woman. Years of hard work have left marks that will undermine her health. 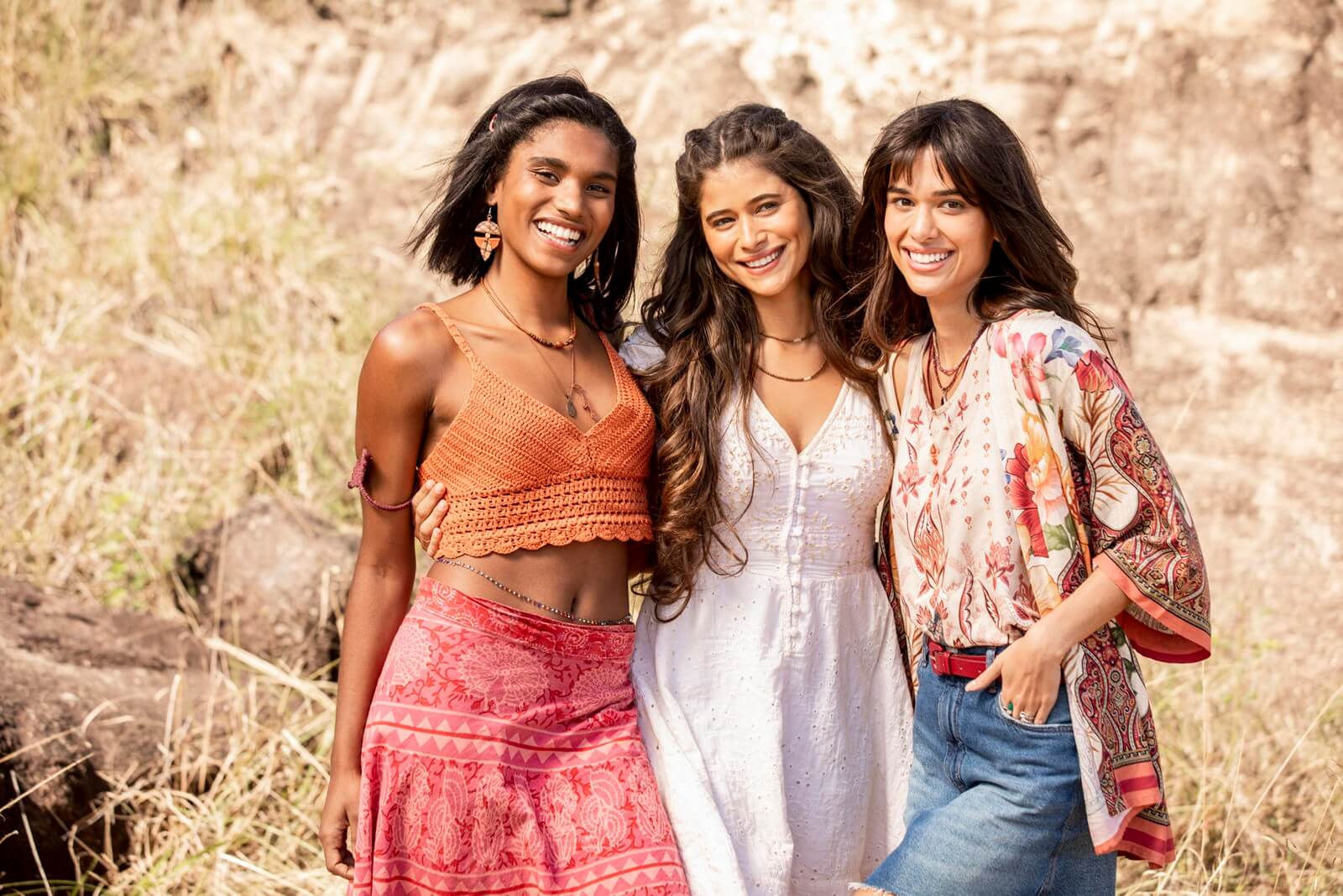 At the Palmeira farm

Zé Paulino (Sérgio Guizé) – Cowboy from Fazenda Palmeiral, is an honest and brave boy, who lives for work and for Candoca (Isadora Cruz), his great love. He lives with his father, Dahomey, for whom he is adored. Zé Paulino is also very loyal to his boss, Colonel Tertúlio (José de Abreu), owner of the farm. Just before Candoca’s wedding day, he has an accident and is presumed dead.

Tertulinho (Renato Góes) – Son of Colonel Tertúlio (José de Abreu) ​​and Deodora (Débora Bloch), he is a womanizer and only wants to know about the good life at the expense of his father. At the beginning of the story, he returns to Canta Pedra after a stay in the capital, supposedly studying, and falls madly in love with Candoca (Isadora Cruz). The young woman always makes it clear that she is faithful to Zé Paulino (Sérgio Guizé), but when the cowboy is presumed dead, Tertulinho sees the opportunity to finally win her over. For that, he will be capable of anything. 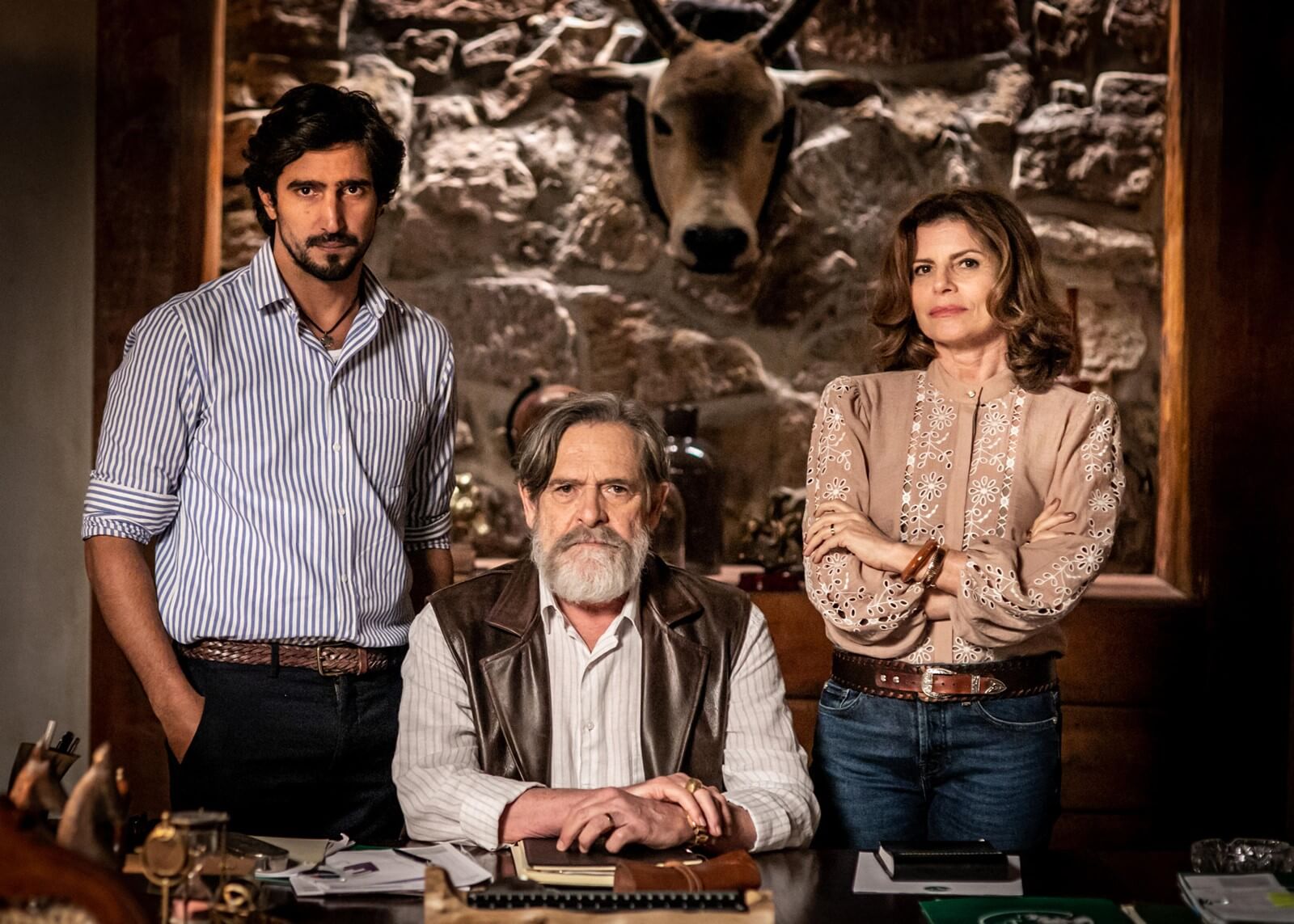 Coronel Tertúlio (José de Abreu) ​​- Father of Tertulinho (Renato Góes) and husband of Deodora (Débora Bloch), he is an old-fashioned colonel, clinging to old principles of honor. Little integrated with the new times, he is proud of the power he has conquered: one of the pioneers of Canta Pedra, he owns the only reservoir in the region. He is very fond of Zé Paulino (Sérgio Guizé).

Deodora (Débora Bloch) – Wife of Colonel Tertúlio (José de Abreu) ​​and mother of Tertulinho (Renato Góes). She is a beautiful, rational and practical woman. She does everything she can to protect her son and maintain the family’s status.

Dahomey (Wilson Rabelo) – Father of Zé Paulino and sharecropper of Colonel Tertúlio (José de Abreu). He is good and noble like his son.

Joel Leiteiro (Matteus Cardoso) – Cattle farmer, old friend of Zé Paulino (Sérgio Guizé). He lives accommodated in his role as the colonel’s eternal servant, to whom he considers himself indebted.

Timbó (Enrique Diaz) – Timbó is a survivor of the drought, of the wild life to which the people of the region have been condemned for generations. He is married to Tereza (Clarissa Pinheiro) and is a friend of Candoca (Isadora Cruz) and Zé Paulino (Sérgio Guizé), for whom he has great admiration. Despite all the difficulties, he is smart, leading life with good humor, creativity, and even a little trickery. Illiterate, but with great vivacity of spirit.

Tereza (Clarissa Pinheiro) – Wife of Timbó (Enrique Diaz), mother of Mirinho (Lucas Galvino), Rosinha (Manuella Guimarães/Sara Vidal) and Joca (Miguel Venerabile). A strong and religious woman, she is also a suffering person, which made her wary and silent. 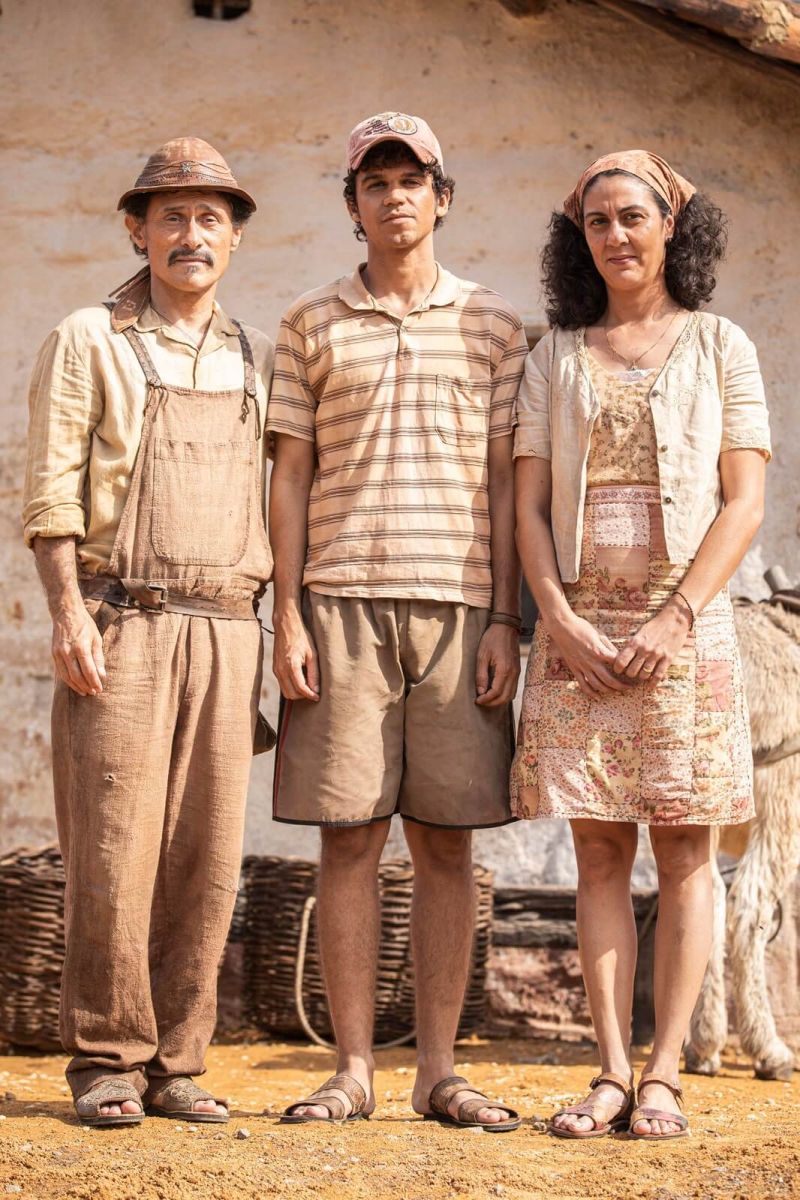 Mirinho (Lucas Galvino) – The eldest son of the Timbó, he becomes a friend of Tertulinho (Renato Góes) and as indolent as himself – without the advantage of his wealth. Always involved with bad company and wanting to get along, preferably without making an effort.

Rosinha (Manuella Guimarães/Sara Vidal) – Daughter of Timbó (Enrique Diaz) and Tereza (Clarissa Pinheiro), as well as her parents, she will always be able to turn around, due to the empirical wisdom that taught them to survive in the wild. A teacher at the local school, she dreams of becoming an engineer.

Xaviera (Giovana Cordeiro) – Seductive and ambitious, she is Tertulinho’s (Renato Góes) lover at the beginning of the plot. Overlooked by the boy, she will approach Zé Paulino (Sérgio Guizé) when he returns to Canta Pedra. With a troubled past, Xaviera is a survivor, a woman willing not to repeat that past, and who will defend tooth and nail for the chance to build a better future for herself.

Vespertino (Thardelly Lima) – Loan shark from Canta Pedra, is a profiteer and opportunist. As a front for his shady dealings, he maintains an exchange office in town. 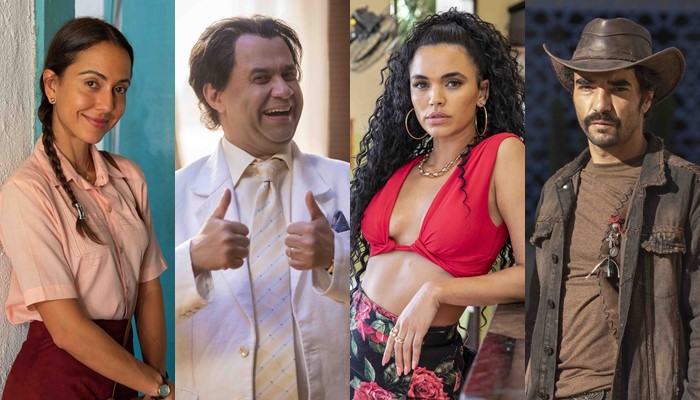 Pajeú (Caio Blat) – Jagunço, is Vespertino’s bodyguard. Serious and menacing, he is, however, very religious, devoted to Father Cícero and the saints of the day.

Cira (Suzy Lopes) – Maid of the Casco de Ouro inn. The city’s main gossip, a true source of information on the lives of all Canta Pedra residents. She maintains a very active account on social media, where she makes up news and destroys reputations.

Sabá Bodó (Welder Rodrigues) – Mayor of Canta Pedra, only thinks about money and perpetuating himself in power. For this he will use his own daughter, who, after her arrest, will be elected mayor. 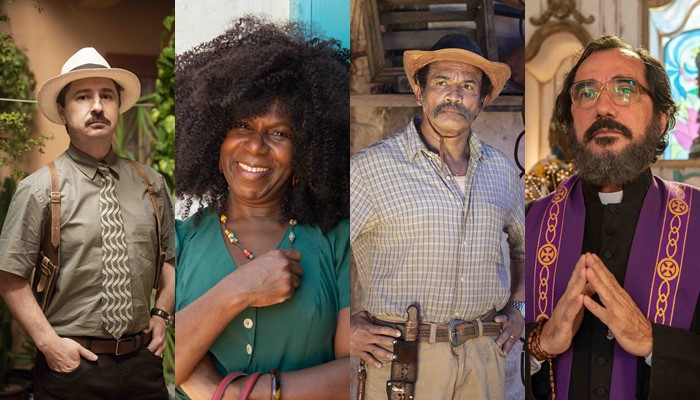 Jessilaine (Giovanna Figueiredo) – Daughter of Sabá Bodó (Welder Rodrigues), will be her father’s political heir, at first a political puppet who will soon acquire a conscience of her own in due course.

Nivalda (Titina Medeiros) – Wife of Sabá Bodó (Welder Rodrigues) and mother of Jessilane (Giovanna Figueiredo). A vain woman who, like many in her midst, was not encouraged to study.

Floro Borromeu (Leandro Daniel) – City delegate, is corrupt and opportunistic. Flattering with the strong and harsh with the weak. 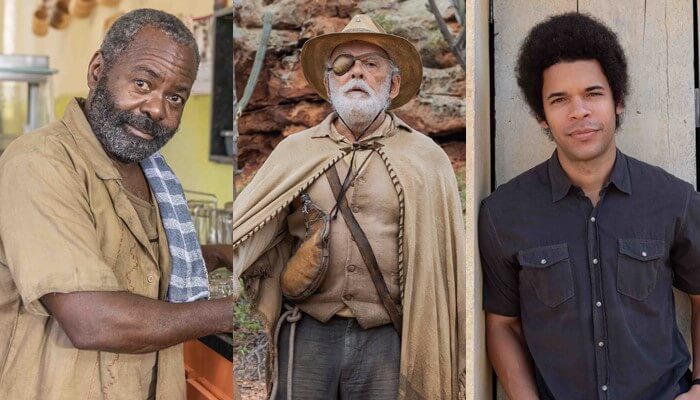 Eudoro Cidão (Érico Brás) – Journalist, with a dubious character, who rents the pen to whoever pays the most. In addition to publishing the local newspaper, Gazeta de Canta Pedra, his printer edits the city’s Official Gazette, and he doesn’t want to lose that advantage.

Tomás Carvalhal (Felipe Velozo) – Manager of the local bank. Abiding by his duties, but ruthless with defaulters. In love with Rosinha (Sara Vidal), to whom he doesn’t have the courage to confess.

Firmino Queiroz (Odilon Esteves) – Lawyer in Canta Pedra, inexperienced in love and in the profession. He is in love with Lorena (Mariana Sena). 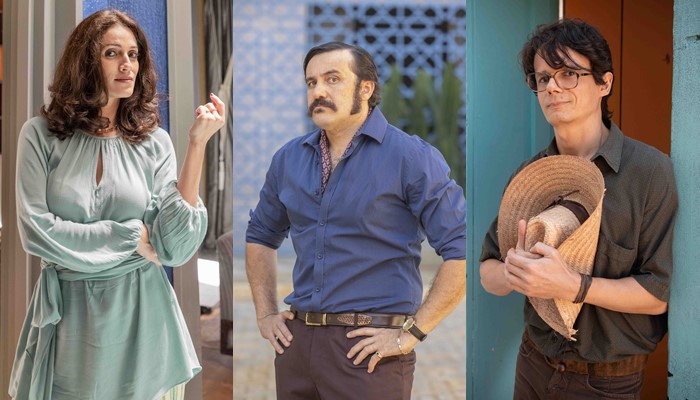 Laura (Eli Ferreira) – Assistant to Zé Paulino/José Mendes (Sérgio Guizé). A cosmopolitan and well-educated woman. In love with the boss.

Dagmar Muricy (Heloisa Jorge): Protestant pastor who assumes the ministry in the city. At first, rival of Father Zezo (Nanego Lira). Afterwards, pacified by Candoca (Isadora Cruz) and by common interests, they will understand each other ecumenically.

Adamastor (Everaldo Pontes) – Goat shepherd, rescues Zé Paulino (Sérgio Guizé) from the waters after the accident in which the boy is presumed dead.

Zahym (César Ferrario) – Trader of Persian rugs, appliances and whatever else appears. He raises his daughter Labibe (Theresa Fonseca) with an iron fist, as she is betrothed to a sheikh from her homeland.

Latifa (Quitéria Kelly) – Wife of Zahym (César Ferrario) and mother of Labibe (Theresa Fonseca). She is an expert merchant, who, under her demure veil, awakens the dreams of the men of the city. 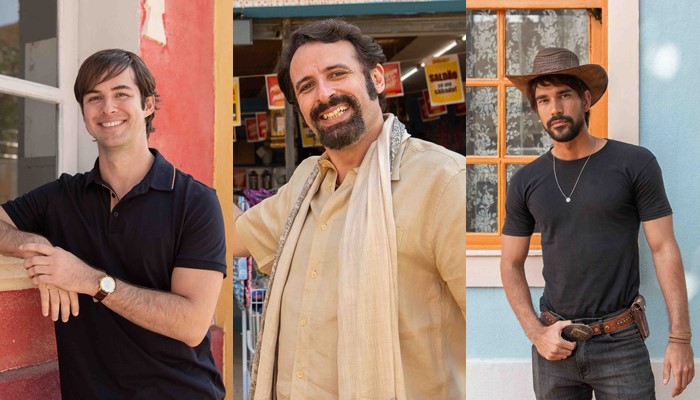 Labibe (Theresa Fonseca) – Best friend of Candoca (Isadora Cruz) and Lorena (Mariana Sena). She waits without much faith for her Prince Charming. She considers being betrothed to an Arab sheikh her father’s oddity.

Maruan (Pedro Lamin) – His family comes from a long line of oil millionaires. He’s a good guy, but his frustrations in love have made him a suspicious man. Friend of Zé Paulino who goes with him to Canta Pedra in the passage of time in the plot. He falls in love with Labibe (Theresa Fonseca).

Father Zezo (Nanego Lira) – Father of Canta Pedra, is funny in his perpetual bad mood. In his moments of impatience, which are not few, he converses with the image of Christ on the church altar. Lorena’s uncle (Mariana Sena), whom he raised as a daughter.

Lorena (Mariana Sena) – Best friend of Candoca (Isadora Cruz) and Labibe (Theresa Fonseca). Niece of Father Zezo (Nanego Lira). She was once married and lives dreaming of a new husband.